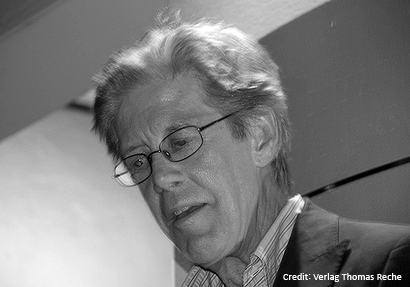 Dear Listeners,
As it is the European summer, I’ve had time to visit my archives to select a few interviews with renowned Australians I have had the honour of interviewing over the last decades. In the next few weeks, I will be publishing 10-minute excerpts from a few of these interviews.
My first Tall Poppies Postcard features the Australian poet, Robert Gray, whom I met on several occasions here in Berlin, where he was a guest of the annual autumn literature festival. Like many who went to school in Australia, I first encountered Robert’s poetry there, where it was an integral part of the English curriculum.
He is an outstanding landscape poet and, alongside Les Murray, has been one of the most significant Australian poets of the last decades. Indeed, the late Les Murray said of Robert Gray, “ He has a remarkable eye, and the verbal felicity, which must accompany such an eye.” Robert’s poems convey precise images of life’s changes and rhythmic independence and might best be described as almost capturing an accurate portrayal of our mental states.
Robert Gray has been a writer-in-residence at Meiji University in Tokyo and at several schools and universities throughout Australia. He has also edited various poetry anthologies and the journals of the painter, John Olsen.
Robert’s work has been awarded many of the most-respected Australian literary prizes, including the New South Wales Premier’s Poetry Award, the Victorian Premier’s Award for Poetry and the Patrick White Award.
Many of Robert Gray’s poems have been translated into German.
Happy listening!
Wishing you all the best from Berlin,