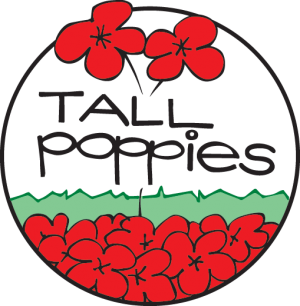 Welcome to Tall Poppies, The Podcast!

Even though I’ve lived away from Australia for close to 30 years, to this day I’m still blown away by the number of expat Australians I’ve come across at the top of their professions. In fact, I’ve wanted to record their stories for a long time and this podcast and blog seem like the perfect way of doing just that.

As luck would have it, in the first episode I have the chance to introduce you to Barrie Kosky, an Australian stage director who, with his invigorating and highly original productions, has constantly impressed me over the last decades.

Like so many of these spirited Australians I’ve encountered, Barrie is anything but typical. In fact, I don’t know any other stage directors in the world who, in the space of six months, have directed Wagner’s “Die Meistersinger von Nürnberg,” Debussy’s “Pelléas et Mélisande” and the musical, “Fiddler on the Roof.” But that’s exactly how Barrie spent the second half of 2017. What’s more, this is a typical schedule for this energetic Melburnian.

He says one of the reasons why he’s been so successful and achieved what he has, is his Australian upbringing, which makes his productions different from European directors.

In our interview, Barrie tells me about the influence of his Russian, Polish and Hungarian grandparents and how they, particularly his Hungarian grandmother, ignited his interest in opera. In fact, they had him chatting about Schiller, Goethe and Wagner on the playground at Melbourne Grammar.

In 2012 Barrie became the artistic director of Berlin’s Komische Oper and that house has become one of the city’s most-revered performance venues. And it’s not just his invigorating productions of standard repertoire; Barrie and his team have also placed a particular focus on neglected works by Jewish composers of the Weimar era. This has given Berlin audiences the chance to sample great music by Paul Abraham, Emmerich Kálmán and Oscar Strauss. Some of this music is highly original, bawdy Berlin jazz, and had not been heard in the German capital in nearly a century.

So do join me chatting with Barrie Kosky in this edition of Tall Poppies, as he recalls his first encounters with opera as a young boy in Melbourne, the indelible experience of hearing the legendary Joan Sutherland and the many influences that have made him one of the world’s most successful stage directors.