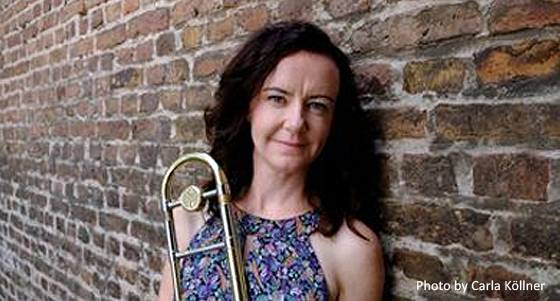 A short note to introduce the latest Tall Poppies, The Podcast, which features the exceptional jazz musician, Shannon Barnett.

Shannon Barnett was named Young Australian Jazz Artist of the Year in 2007, an accolade that recognised her exceptional trombone playing and compositional talent.

Born in Traralgon, in the Australian state of Victoria, the young musician received her first musical training through that state’s music education system. She went on to complete her music studies at the Victorian College of the Arts, from which she graduated in 2004 with a major in jazz trombone.

Shannon also completed a Master’s degree in music in New York in 2013, where she performed with various local ensembles. From there, she moved to Germany and in 2014, she became a member of the WDR Big Band in Cologne. Since 2015, Shannon has had her own quartet with Cologne-based musicians.

Over the last decade, Shannon has become an important contributor to the Australian and international music scene, performing in ensembles, such as Vada, the Australian Art Orchestra, Charlie Haden and the Paul Grabrowsky Sextet. Shannon has also worked as a multi-instrumentalist and composer with the contemporary circus group, Circus Oz.

But despite her tremendous success, it has not all been smooth sailing for the young female musician, jazz being a very male-dominated realm.

“As a young woman I had horrendous things happen to me,” says Shannon,” but the positive aspect now is that the conversation has started. Men are asking why aren’t there more women around in jazz.”

In this episode of Tall Poppies, the Podcast, Shannon Barnett joins me to talk about her phenomenal career in music, the challenges she continues to face as a female musician and about the inspiration she finds through teaching the next generation of musicians. Do join me!