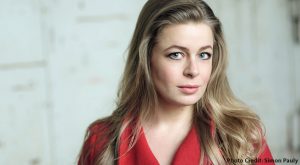 “ I mean it sounds (like a) cliché, but that was a phone call that changed my life completely,” said singer, Siobhan Stagg, recollecting the day the Berlin Philharmonic Orchestra called to ask her to perform “Brahms’s Requiem”.

Siobhan Stagg hails from Mildura, a town in the Australian state of Victoria, close to the borders of both New South Wales and South Australia.

After finishing high school in Mildura, Siobhan initially studied music at Melbourne University and later at the Wales International Academy of Voice in Cardiff. She has been the recipient of several scholarships, including the Australian International Opera Award and the Amelia Joscelyne Memorial Scholarship from the Dame Nellie Melba Opera Trust.

Siobhan’s many accolades include first prize at the 2014 International Mozart Competition and first prize and Audience Choice Award in the 2012 Mietta Song Competition.
Since 2013, Siobhan has been a member of the ensemble at the Deutsche Oper Berlin, where her stage roles have included Pamina in Die Zauberflöte, Musetta in La Bohème, and Waldvogel and Woglinde in The Ring Cycle, conducted by Sir Simon Rattle. She has also frequently been a guest at many other opera houses, including London’s Royal Opera House, the Dutch National Opera, Munich’s Bavarian State Opera and the Lyric Opera of Chicago.

On the concert platform, Siobhan has appeared as a soloist at events the likes of the Salzburg Mozartwoche and the BBC Proms, as well as with prestigious ensembles the calibre of the Berlin Philharmonic Orchestra and the Melbourne Symphony Orchestra.
Breandáin caught up with Siobhan backstage at the Deutsche Oper in Berlin, where she recalled her journey from a regional Victorian town to performing on some of the world’s most prestigious stages.

Be the first to review “Siobhan Stagg, Singer” Cancel reply

“ I mean it sounds (like a) cliché, but that was a phone call that changed my life completely,” said singer, Siobhan Stagg, recollecting the day the Berlin Philharmonic Orchestra called to ask her to perform “Brahms’s Requiem”.
Music Selections