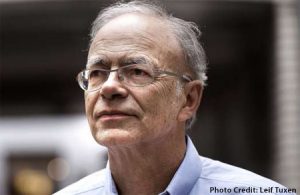 “I think that if you look at the history of our species, the story, on the whole, is one of progress. Despite the ups and downs and, of course, despite the appalling things that happened in the mid 20th century… I think the greatest threat we face at the moment is climate change and I’m not particularly optimistic about our being able to deal with climate change before we really get some major disasters.”

Breandáin caught up with the renowned Melburnian, Peter Singer, in Berlin at the presentation of the 3rd annual “Peter Singer Award,” an accolade given to those working on strategies to relieve the suffering of animals.

Peter Singer was born in Melbourne in 1946, the son of two Jewish immigrants from Vienna. Three of his grandparents perished in concentration camps in the 1940s, and his sole surviving grandmother, who had survived Theresienstadt, came to live with his family in Melbourne, bringing with her a paper Peter’s grandfather had co-authored with Sigmund Freud.

Much of Peter Singer’s career has been devoted to social and political causes, most notably animal rights, but also famine and poverty relief, environmentalism and reproductive rights.

One of his first articles entitled, “Famine, Affluence, and Morality” argues that affluent persons are morally obligated to donate far more resources to humanitarian causes than is considered normal in Western cultures.

Other publications include several books, among them, Practical Ethics, Rethinking Life and Death: The Collapse of Our Traditional Ethics, and The Life You Can Save: Acting Now to End World Poverty.  But perhaps he is best known for his 1975 book, Animal Liberation, A New Ethics for Our Treatment of Animals. Its publication greatly contributed to the growth of the animal rights movement by calling attention to the routine torture and abuse of countless animals in factory farms and in the course of scientific research. At the same time, it generated significant new interest among ethical philosophers in the moral treatment of non-human animals. (Photo: Alletta Vaandering)

Be the first to review “Peter Singer, Philosopher” Cancel reply

Much of Peter Singer’s career has been devoted to social and political causes, most notably animal rights, but also famine and poverty relief, environmentalism and reproductive rights.

Add to Wishlist
Email to a friend
Category: Literature