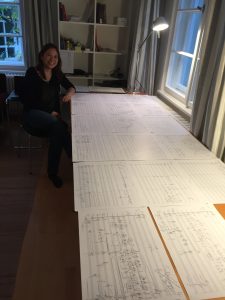 Composer Liza Lim with her new work, “Annunciation Triptych.” Each part of this three part composition is dedicated to a female spiritual figure

I hope this finds you well.

Liza is one of Australia’s most prolific composers who has created compositions for many of the world’s leading orchestras including the Los Angeles Philharmonic, BBC Symphony, and the Südwest Rundfunk Orchestra. Her music has been featured in many notable festivals.  She is currently completing a number of major new works to be premiered in 2022. Since 2017 Liza has been Professor of Composition at the Sydney Conservatorium of Music, where she also runs the Composing Women Program. Prior to this she was Professor of Composition and Director of the Centre for Research in New Music at the University of Huddersfield in the UK.

Liza is pictured here with her new work,  “Annunciation Triptych.”  Each part of this composition is dedicated to a female spiritual figure. “Mary/ Transcendence after Trauma” (Part II) will be premiered by the Symphonieorchester des Bayerischen Rundfunks in 2022.

Born in Perth, Liza spent much of her childhood in Brunei. She attended boarding school in Melbourne, and then completed her tertiary studies in Australia. Among her numerous accolades are the Don Banks Award for Music and the 2021 Hans and Gertrud Zender Foundation’s Composition Prize ‘Happy New Ears’. In 2021/2022 Liza Lim is a Fellow at the Wissenschaftskolleg zu Berlin or Institute of Advanced Study.

And good news for Berliners, Liza will be our Guest of Honour, at the Tall Poppies Talk Australian Salon in February.

Wishing you all the best from Berlin; stay safe!